Written by
Admin
Posted in
Uncategorized
Comments
Leave a comment

There are a few questions that are frequently asked about the Varmint R line of bullets, as they are not of conventional construction. We have answered a few of these below:

Are brass jackets hard on the barrel?
Brass jackets made from rimfire cases are only about .010-.012 inches thick, made of 70% copper and 30% zinc. Most copper jackets are around .018-.022 inches thick, and are made of 5% to 10% zinc with the balance copper. These two facts lower the friction of the rimfire jacket, so that it is actually easier on the barrel than a copper jacket. Zinc reduces friction, and the thin jacket is engraved more easily by the rifling. Higher copper content alloys do not break up on impact as much as the brass jackets, so they make better bullets for edible and dangerous game hunting. Brass jackets tend to break up when they hit the ground, so they make better varmint bullets with greatly reduced richochet potential.

Do brass jackets foul the bore?
Any bullet fouls the bore to some degree. Brass jackets generally causes less fouling than commercial jackets, for a couple of reasons. First, it usually exhibits reduced friction, being thinner and slightly less “gummy” than softer copper alloys. These brass jackets can’t be fired at as high velocities due to the thinness of the jacket, which forces the reloader to use relatively reduced loads for lower velocities, and therefore causes less fouling than a bullet fired at higher speed.

What about the rimfire “dent” from firing?
Cases which have been fired in certain guns with sharp, square edged firing pins may in fact have an actual tear or hole in the edge. These are apparent when we remove the rim from the jacet during swaging,  and jackets exhibiting bad tearing are discarded at this point. Most of the rimfire cases will simply be dented at the rim, and the dent is pushed back out again when the rim is removed and the core is seated. You can usually see where the dent was in the final product, but should not cause any meaningful detriment to accuracy.

Are brass jacket bullets accurate?
The answer to this question would be the same as if you ask “Are Sierra bullets accurate?”  “Are Hornady bullets accurate?”  Sure, but you have to work up the best load for each in any given gun, and some guns may perform slightly better with one brand than another. The short answer is “Yes! Surprisingly accurate.”

Are there any restrictions on using rimfire jacket bullets?
Yes, there are. Because the jackets are thin, the velocity should be reduced to prevent bullet disintegration in flight. Start loading below 3000 fps, and work up until your bullets start to create one or two flyers out of a group of five shots, then back down until you get the tight groups back. Some guns will handle higher velocity than others with the thin jackets. A general rule of thumb is that the limit in a 1-10 barrel twist is somewhere around 3,200 fps, but some shooters have reported good results at higher velocity. The jackets are thin so the bullets open up quickly or even blow apart on impact, making great varmint bullets but poor edible game bullets. Of course, because they are thin, they act as if they impact at far higher velocities than what you would think, saving powder and barrels in the process.

So what’s the difference between Varmint-R, Hunting, and Target projectiles?

Here at B&T we want to offer a solid selection of projectiles that will suit the purpose of any shooter; whether you be a casual sporting shooter, a serious hunter, or a long range precision rifle competitor. To that end there are 3 different lines we currently offer that are designed to cater to your needs. Read on to learn about each of these lines. 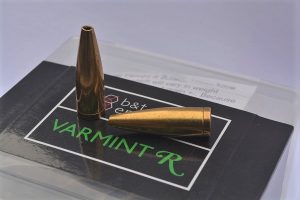 The Varmint-R line begins life as factory ammunition – that’s right, loaded rounds. While many shooters keep their brass cases to reload (like you!) there is still a lot of brass around that would be destined for the bin or a scrap yard. Instead of letting that good metal go to waste, we collect rimfire, 9mm and .40S&W cases and process them into projectiles in .224″, .243″, .308″, and .338″. With their harder and thinner composition than that of standard gilded copper jackets, these projectiles offer explosive performance on small to medium game at a lower cost than our copper jacketed rounds. Offerings are a combination of Flat Base (FB) with Open Tip (OT) or Soft Point (SP), with an 8S ogive. 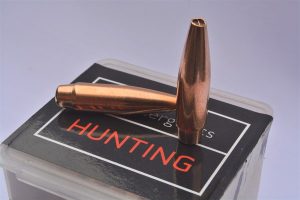 Our Hunting projectiles are a conventional copper jacketed, lead cored projectile that start as a coiled strip of thin copper. After punching out discs from the copper strip, jackets are drawn down to the required diameter and mated with an appropriate weight swaged lead core. This core is subject to substantial pressure to seat it solidly in the jacket, after which the point is formed. Offered in Flat Base (FB) or Rebated Boat Tail (RBT), matched to Open Tip (OT), Soft Point (SP) or Hollow Point (HP) with an 8S ogive. 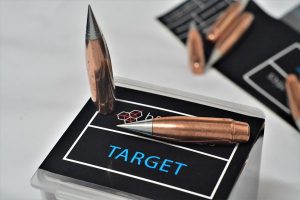 The Target line of projectiles are made in much the same way as the Hunting line, but with far more rigorous quality control processes put in place. The target line is offered exclusively in an ultra low drag (ULD) ogive, and with a precision machined steel tip. The precision machined tip provides a very small meplat, that when coupled with the ULD ogive provides a high BC bullet that is just the ticket for long range hole punching. The steel tip also acts as a sort of ballistic tip in soft targets, making the Target line also suitable for use against game animals in a pinch. Target projectiles are available as a Rebated Boat Tail (RBT) Metal Tip (MT), in a ULD ogive.

Subject to current order lead times, tooling availability, and minimum order quanities, we are able to offer custom combination projectiles. If you have a specific projectile in mind that you don’t see listed on our website, head over to our Contact Us page and we’ll work with you to provide a high quality bullet tailored to your needs.

Now based outside of Townsville, we look forward to delivering a precision Australian made product.